The up-and-coming Artiphon and controller vets Livid Instruments recently posted updates for their INSTRUMENT 1 and Minim Kickstarter projects.  Both are exciting since they could really improve the creative potential of mobile music making, particularly for live performance (with iOS already being a strong platform for experimentation and compositional sketching).

The INSTRUMENT 1 by Nashville-based Artiphon is a guitar-like controller that lets you play by either strumming, bowing, or tapping notes.  According to their latest Kickstarter update, beta testing is underway now in Nashville and L.A.  You can apply to participate in the test program here if you live around either of those cities.

In addition to beta testing, they’re in the thick of development for an iOS companion app designed to showcase the capabilities of the INSTRUMENT 1.  If things progress according to plan, they’ll be set to begin shipping in March, within a couple months of their initial estimate of January.  As a backer of the project, and in light of some high profile Kickstarter fails, I’ve appreciated Artiphon’s transparency via monthly updates since they hit their funding goal.  Hopefully the March target will hold up and the first batch of INSTRUMENT 1s will be in the hands of musicians by springtime (Joy Spring anyone?). 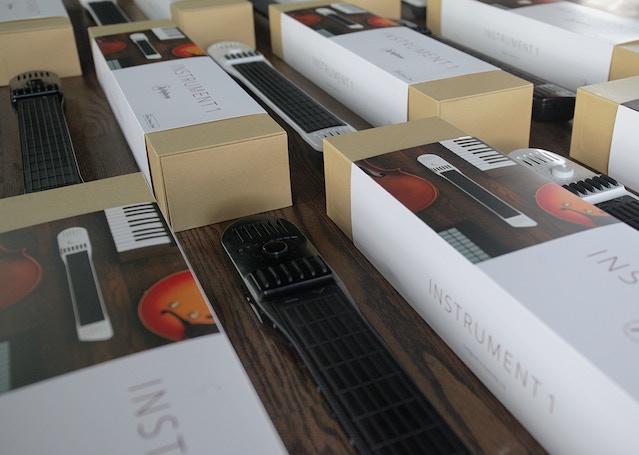 The INSTRUMENT 1 should start shipping to backers this spring.

Then there’s the Minim being developed by Livid Instruments, who ran a successful Kickstarter for their innovative Guitar Wing controller in 2014.  Minim is an iPhone-sized bluetooth MIDI controller that lets you wirelessly control virtual instruments on iOS or OS X using a combination of 8 pads, 15 buttons, a touch fader, and 3D motion control.  Livid has a bunch of experience in the hardware world and the big challenge for them with Minim is developing an iOS app that makes it easy to play a Minim out of the box and integrate it with other iOS music apps.

In their most recent Kickstarter update they shared the following video clip demonstrating use of the touch fader to achieve a sort of strumming effect.  Assuming Livid is on track with their project milestones, they should be assembling Minims and testing the app now.  And if they stay on schedule, Minims should start shipping in February.

If both of these instruments and their companion iOS apps deliver, it could accelerate the trend toward multi-device usage and expand iOS as a live performance platform, especially now that we have Link for synchronizing sequenced parts wirelessly between devices.

With the winter NAMM show coming up in a couple of weeks, I’m hoping we’ll get a closer look at these projects, particularly the software parts.  And if you missed out on the Kickstarters, don’t despair, you can pre-order the INSTRUMENT 1 here and Minim here.

Read about Factotumo on Create Digital Music and Synthtopia.

Music is a comfort and REAPER is a pretty great DAW

I’m Taking Some Time Off

Factotumo is about music, technology, and code. Read the longer story here.